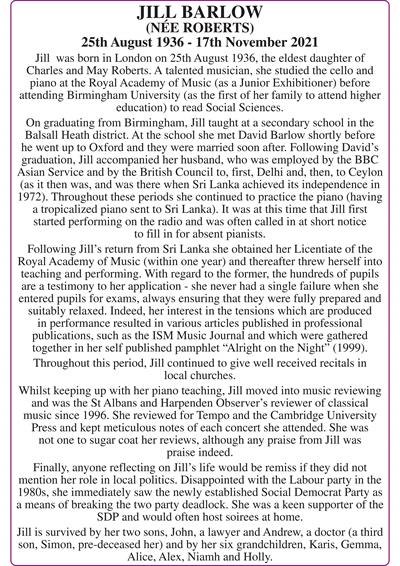 JILL BARLOW (née Roberts) 25th August 1936 – 17th November 2021 Jill was born in London on 25th August 1936, the eldest daughter of Charles and May Roberts. A talented musician, she studied the cello and piano at the Royal Academy of Music (as a Junior Exhibitioner) before attending Birmingham University (as the first of her family to attend higher education) to read Social Sciences. On graduating from Birmingham, Jill taught at a secondary school in the Balsall Heath district. At the school she met David Barlow shortly before he went up to Oxford and they were married soon after. Following David’s graduation, Jill accompanied her husband, who was employed by the BBC Asian Service and by the British Council to, first, Delhi and, then, to Ceylon (as it then was, and was there when Sri Lanka achieved its independence in 1972). Throughout these periods she continued to practice the piano (having a tropicalized piano sent to Sri Lanka). It was at this time that Jill first started performing on the radio and was often called in at short notice to fill in for absent pianists. Following Jill’s return from Sri Lanka she obtained her Licentiate of the Royal Academy of Music (within one year) and thereafter threw herself into teaching and performing. With regard to the former, the hundreds of pupils are a testimony to her application – she never had a single failure when she entered pupils for exams, always ensuring that they were fully prepared and suitably relaxed. Indeed, her interest in the tensions which are produced in performance resulted in various articles published in professional publications, such as the ISM Music Journal and which were gathered together in her self published pamphlet “Alright on the Night” (1999). Throughout this period, Jill continued to give well received recitals in local churches. Whilst keeping up with her piano teaching, Jill moved into music reviewing and was the St Albans and Harpenden Observer’s reviewer of classical music since 1996. She reviewed for Tempo and the Cambridge University Press and kept meticulous notes of each concert she attended. She was not one to sugar coat her reviews, although any praise from Jill was praise indeed. Finally, anyone reflecting on Jill’s life would be remiss if they did not mention her role in local politics. Disappointed with the Labour party in the 1980s, she immediately saw the newly established Social Democrat Party as a means of breaking the two party deadlock. She was a keen supporter of the SDP and would often host soirees at home. Jill is survived by her two sons, John, a lawyer and Andrew, a doctor (a third son, Simon, pre-deceased her) and by her six grandchildren, Karis, Gemma, Alice, Alex, Niamh and Holly.